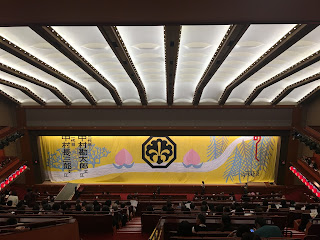 February Kabuki is very popular and it is very difficult to get tickets even for Japanese because the two sons of famous actor (KANKURO) will appear on the stage. But you can get single act ticket at the theatre, so if you want to see REAL Kabuki play, please make a line to buy tickets one hour before to start selling the tickets(please refer time tables bellow). Evening Show is the most difficult to get tickets, but I recommend to see Matinee’s first act called SARUWAKA(11am). It is Japanese traditional dancing and I promise you will enjoy to see it!

You can see the detail of this month’s Kabuki play.
https://www2.ticket-web-shochiku.com/en/performance/00117021.html
http://www.kabuki-bito.jp/news/3827
(Single act tickets selling time table in Japanese) 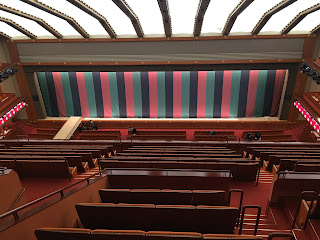 Matinee (from 11:00 AM): Single act ticket will sell from 10:30
SARUWAKA EDO NO HATSUYAGURA
[The First Kabuki Performance in Edo]
★★★★★
(Strongly recommend! This act is Japanese traditional dancing and everybody can feel happiness!)

ŌAKINAI HIRUGAKOJIMA:(Single act ticket will sell from 11:15)
[Yoritomo in Exile]
★★☆☆☆
(Difficult to understand. This is the story of Japanese Old histrical general of Heian era.)

SHISEN-RYO KOBAN NO UMENOHA(Single act ticket will sell from 12:05)
[Four Thousand Gold Coins]
★★☆☆☆
(Difficult to understand. But you can see the ordinary life of the people of Edo era. This is a story of bank robbery of Edo era who broke the government’s bank safe and described the life in prison.)

ŌGI JISHI
[The Lion-head Fans]
★★★★☆
(Recommend. Easy to understand. This is a short dancing act. Total time is about 10 minutes. It is typical Kabuki dancing act.)

——————————————
Evening Show (from 4:30 PM):(Single act ticket will sell from 2:00PM)
KADONDE FUTARI MOMOTARO
[The Brothers’ Debut as Two Momotarōs]
★★★★☆
(Momotaro is the hero of an Japanese old tale which any Japanese knows, but tourist is also easy to understand because the story is very simple. The two kids are so cute and except them, you can enjoy typical Kabuki.)

EHON TAIKŌKI(Single act ticket will sell from 4:45PM)
[ Picture Book of the Taikō Chronicles – The Retreat at Amagasaki]
☆☆☆☆☆
(Better to avoid. This is very famous Kabuki act but for tourists, it is very hard to understand. Very deep story)

UME GOYOMI(Single act ticket will sell from 5:50PM)
[Tanjirō’s Love Triangle]
★★★★☆
(Recommend! Easy to understand. Also you can see the beautiful BLUE RIVER on stage! This is the story of jealousy of two women.)

I hope you will enjoy your Kabuki watching! 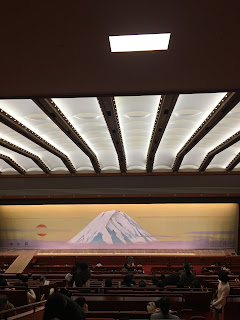 April Kabuki is comparatively easy to get ticket. It is because the ...

March Kabuki is also difficult to get tickets even for Japanese beca...