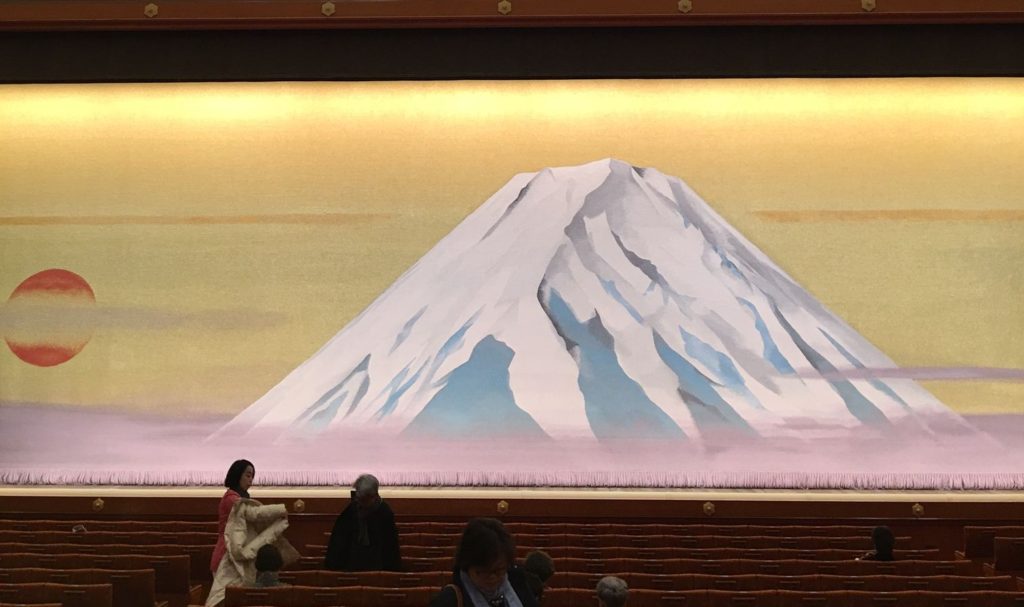 March Kabuki is also difficult to get tickets even for Japanese because the most famous young Kabuki actor called “EBIZO” will appear on the stage. EBIZO is a man who was born as a son of DANJURO. DANJURO is one of the Kabuki’s most famous man (Died in 2013) and also very important historical stage name in Kabuki history. If you have a chance, you should see EBIZO’s stage. Because Kabuki’s future is on his shoulder.

It is difficult to get tickets, but you can get single act ticket at the theatre, so if you want to see REAL Kabuki play, please make a line to buy tickets one hour before to start selling the tickets(please refer time tables bellow). I recommend to see Evening show’s last act called SUKEROKU(from 16:45). This show’s play time is about two hours (without no break) and makes us to learn to ENDURE sitting for a long time:-). But after the opening speech by UDANJI, you will slip into the world of Edo 300 years ago! I promise you will absolutely enjoy to see it!


You can see the detail of this month’s Kabuki play.
https://www2.ticket-web-shochiku.com/en/performance/00117031.html
http://www.kabuki-bito.jp/news/3914
(Single act tickets selling time table in Japanese)

This month you can see visually stunning stage sets in several masterpieces from the kabuki classics, as well as a dance and a ‘New Kabuki’ play. The splendid performers range from young stars to the highest-ranking mature actors. In the matinee there is a dance commemorating the third anniversary of the death of Bandō Mitsugorō who was an excellent actor and dancer. In the evening show there is ‘Sukeroku’, a popular play that is being performed to celebrate the 300th anniversary of the beginning of ‘katō-bushi’, a genre of music played during the show.(From SHOCHIKU official site)

2) from YOSHITSUNE SENBON ZAKURA[Single act ticket will sell from 11:15]
Tokaiya,Daimotsu no Ura
[From ‘Yoshitsune and the Thousand Cherry Trees'[Tokaiya Inn] and [Daimotsu Bay]]
★★★★☆
(Recommend. This act is one of the most famous program of Kabuki and Bunraku. The story is easy to understand. The revenge story of Heian era. You can enjoy the dynamism of Kabuki. But the play time is a little long. I will cheer you up sitting in the narrow sheat!)

3) Jisssei Bando Mitsugoro Sankaiki Tsuizen Kyōgen[Single act ticket will sell from 13:10]
KAGURAUTA KUMOI NO KYOKUMARI -Dontsuku
Commemorating the third anniversary of the death of Bando Mitsugoro X
[A Street Performance by Dontsuku]
★★★★★
(Strongly recommend. This is Japanese traditional Musical Show. On the stage, today’s famous actors meet in one place. The dancing is full of fun and makes you happy!)

4-2) KEISEI HAMA NO MASAGO -Onna Goemon
[A Female Goemon]
★★★★★
(Strongly recommend! The play time is only ten minutes and you can not afford to blink! You can feel the gorgeous of the stage and actor. The story is very simple and easy to understand. )

5) SUKEROKU YUKARI NO EDO ZAKURA[Single act ticket will sell from 16:45]
[Sukeroku, the Hero of Edo]
★★★★★
(Strongly recommend! This is a story of Edo era’s hero and the story is easy to understand. You can enjoy to seeing many beautiful prostitute of Edo era with colorful Japanese clothes (KIMONO) (but they all are men…). But the play time is too long to endure, so if you do not have a time to see whole show or are not confident to sitting thru the whole show, I think it is enough to see only the first 30-40 minutes of the show, until EBIZO appears. Don’t miss to see EBIZO!)

April Kabuki is comparatively easy to get ticket. It is because the ...

February Kabuki is very popular and it is very difficult to get ...