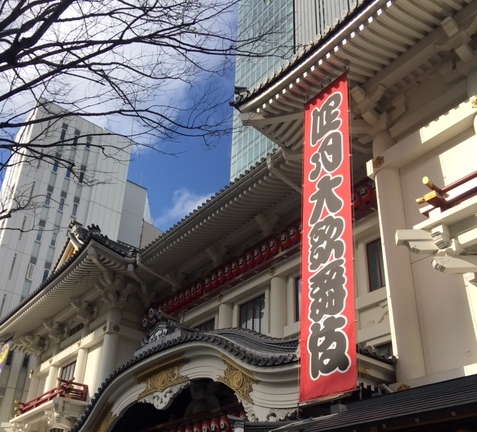 April Kabuki is comparatively easy to get ticket. It is because the popular young actors, like EBIZO, do not appear on the stage. And the programs are also moderate and you can not see the actor with extremely fancy make-up. On the other hands, the skilled and aged famous actors (for example TOJURO, 85 years old) appear on the stage. So you can enjoy to see stable Kabuki stage and EDO-era’s ordinary citizens and Samurai’s life and the way of thinking.

You can get single act ticket at the theatre, so if you want to see REAL Kabuki play, please make a line to buy tickets one hour before to start selling the tickets(please refer time tables bellow). I recommend to see Evening show’s last act called Yakko Doujouji(from 18:35). You can see many monk on the stage (about 20 people!) and sometimes they plays comically.

You can see the detail of this month’s Kabuki play.
https://www2.ticket-web-shochiku.com/en/performance/00117041.html
http://www.kabuki-bito.jp/news/3980
(Single act tickets selling time table in Japanese)

1)DAIGO NO HANAMI
[Blossom-viewing in Daigo]
[Single act ticket will sell from 10:30]
★★★★★
(Strongly recommend! It is very suitable for tourist and aliens. During this show, you can enjoy to see the Japanese traditional dances with beautiful Kimono (Japanese traditional clothes for women) and fancy make-up like Darth Maul in Star Wars movie. The story is also easy to understand and you have a chance to see the SUPPON, the special stage equipment. )

2)ISE ONDO KOI NO NETABA
[The Ise Dances and Love’s Dull Blade]
[Single act ticket will sell from 11:15]
★★★☆☆
(The story is not too difficult to understand but very long show for two hours without toilette break. The conversation between actors are many and long, so I strongly recommend to use the language guide (1000 yen), if you would like to understand the whole story completely. This is the story of a man who killed many people by cursed Japanese sword, but probably you will not feel the darkness of the murder. It will be surprising that this story was made 300 years ago, Edo era. )

3)ICHINOTANI FUTABA GUNKI -KUMAGAI JINYA
From [The Chronicles of the Battle of Ichinotani]
[Kumagai’s Battle Camp]
[Single act ticket will sell from 12:15]
★☆☆☆☆
(Difficult to understand and better to avoid. But this is a typical Kabuki’s old story (JIDAI-MONO) of Edo era, so if you would like to experience the real Kabuki, you should see this show. There are no fancy make up which tourist and alien expect to see, but this story indicates the Japanese basic way of thinking, relationship between family and the societies. This show has many famous scene called “MIE” which the actor stop their motion and everybody applause. )

3)KEISEI HANGONKŌ – Tosa Shōgen Kankyo
[Stuttering Matahei]
[Single act ticket will sell from 2:25]
★★★☆☆
(Easy to understand. This play describes the ordinary people’s life of Edo-era, so there are no fancy make-up. If you want to see those kind of fancy play, you should avoid this show but if you want to see the life of Edo era, 300 years ago, you should check this. In the second half of the play, you can see that many people sobs quietly. That’s right, this show is very nice story and struck Japanese feeling.)

4)KATSURAGAWA RENRI NO SHIGARAMI -Obiya
[Ohan and Chōemon]
[Single act ticket will sell from 4:45]
☆☆☆☆☆
(Better to avoid. Difficult to understand even for Japanese. But this play is very popular Kabuki act. The actor called TOUJURO, who is Japanese national human treasure, will appear. He is 85 years old! This is a story of a man having an affair with a 14 year old girl and finally died together. )

5)YAKKO DŌJŌJI
[The Footman at Dōjōji]
[Single act ticket will sell from 6:35]
★★★★★
(Strongly recommend! You can enjoy the Japanese traditional dancing with variety of masks. The main actor is ENNO-SUKE. He is very popular as acrobatic play. The story is also easy to understand. You will see the big bell upon the stage and finally… Please check with your own eyes how the story goes on.)

I hope everyone enjoy to see Real Kabuki in Kabukiza-thetare!

March Kabuki is also difficult to get tickets even for Japanese beca...

February Kabuki is very popular and it is very difficult to get ...